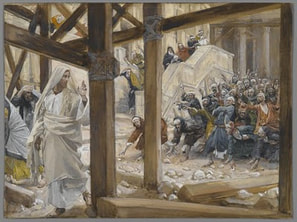 Luke 9: 51-62
The time was drawing near, when Jesus would soon leave.
He sent messengers ahead, preparations to achieve.
At a village they arrived, where Samaritans called it home.
But of Christ they’d not approve, (and this they made it known)
as the place He journeyed to was Jerusalem the town.
They refused to accept Jesus, on Him they all did frown.
The Apostles were concerned at this rejection of the Christ,
and considered just what punishment, this dreadful act sufficed.
“Shall we call down fire from heaven, and burn them in disgrace?”
But Christ rebuked them greatly, so they sought another place.
Travelling along, they met a man along the road
who wished to follow Jesus, and his enthusiasm glowed.
“Foxes have their holes, and the birds all have a nest,
but the Son of man named Jesus, has nowhere He can rest.”
Another said to Jesus, “My father is now dead.
I have to go and bury him, so wait for me instead.”
But Jesus said “No leave him, the dead will bury their own.
Come and spread the news, let God’s Kingdom now be known.”
Another said, “Lord Jesus, let me say goodbye,
I must prepare my relatives, or they may grieve and sigh.”
Jesus spoke now firmly, “Once the hand is on the plough,
no-one who looks back, deserves the Kingdom now.”

Lord Jesus so forgiving to Samaritans that time,
e’en though they did forsake Him, He spared them for their crime.
No leeway for tradition, no obstacles allowed,
just follow Jesus always, of this we must be proud
He makes it clearly known, that our first priority,
is God’s work first and foremost, for all eternity.  Cjs.

As there was animosity and distrust between the Jews and the Samaritans, so the latter did not approve of Jesus because He was going to Jerusalem.   Christ’s apostles wanted to punish the Samaritans for this disapproval but Jesus said no.  He merely rebuked His apostles for suggesting this, and He left to go elsewhere.   Then potential followers made excuses as to why they were not ready to follow Him.
Everything Jesus does or says has real meaning for the way we should live.
Not everything though is to be taken literally.   Some things Jesus says may seem harsh and cruel at face value, at least that is how I perceive it, but it is the meaning behind the words that we look for.  For example, when He says we must ‘hate’ someone, surely He means that nothing and nobody should stand in the way of our loving God and doing His work.   After all He is always saying we must love another.
This loving Jesus cares about us.   Firstly, people who have different beliefs should not be punished in any way.   Secondly Jesus made it clear He had no home or place of rest, and that any followers must not let traditions, obstacles or personal desires impede the fulfilling of His cause.

Lord help me to seek full interpretation of Your Truth through Your Holy Church.

Luke 10:1-12 & 17-20
Are you about to commence or re-fresh some task for God, some work you have been called to or charged with? Today’s Gospel provides divine guidelines for carrying out the endeavour.

Today we see Christ preparing to journey to many towns, proclaiming His message of repentance, mercy and salvation. His mission is urgent and time is short. So first He lays the preliminary groundwork by sending out disciples in pairs to those places, akin to an advanced guard or a modern day awareness-raising advertising campaign. Their visits and actions no doubt sparked anticipation, curiosity and excitement in those locations. The towns’ receptiveness was gauged. This cultivated a fertile soil for Christ’s arrival and message, and ensured His mission would have maximum efficiency and effectiveness.

Christ issued specific instructions on how to proceed with God’s work:-
nevertheless give God’s message that “the kingdom of God is very near” indiscriminately to all.

What a wonderful, clear manual Christ has provided for doing God’s work in our world!

I wonder how often I have failed to follow some or even most of Christ’s guidelines? Have I decided to ‘go it alone’, been over-anxious about details and lacking in trust, had misplaced strivings or pride, failed to pray for the task in hand or to rejoice as it unfolds?

I know that when God’s spirit and guidance are omitted when trying to do His work my endeavours are likely to flounder or fail, despite my best intentions. I pray that in future I, and everyone, may embed these God-given directives more fully into all we are engaged in for God.

PS. As I write this, our nation is observing 72 minutes silence for the 72 victims of the Grenfell tragedy. In the same way that Christ’s 72 disciples brought healing to those who suffered, may the love shown to the 72 bereaved families bring healing and consolation to them.